What Causes the Power to Go Out in One Part of a House? 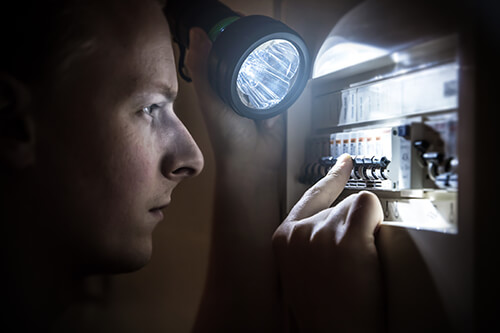 The power could go out in one outlet, one room, or one part of your house. This might be an easy fix by reducing your electricity use on that circuit. If using too much electricity wasn’t the cause behind the power going out, then something has gone bad within the electrical system.

A tripped circuit breaker is the most common cause of a power outage in one part of the house. Before you go to the circuit panel and flip the switch, however, it’s important that you know how to safely do this. You need to turn the tripped switch all the way off before turning it back on. In some situations, the switch for the part of the house affected may even appear to be on. You should flip it off, then back on to check if it was the issue.

If the power goes out again after it was just fixed, then something connected to the breaker may be bad. Another possibility is a bad breaker. In either situation, you need an electrician to inspect your home’s electrical system.

Many houses have GFCI (ground fault circuit interrupter) outlets. This type of outlet is designed to automatically shut off electricity to that circuit when it detects current flowing to a person or water. Just as it’s possible for regular outlets to trip, the GFCI could trip. You might have to press the reset button on the GFCI outlet to reset it and restore power to that circuit.

If the circuit quickly trips again after you fixed it, then you may have too many appliances and electronics plugged into the circuit. Unplug a few items and check again. If the circuit still trips, then you need professional help to fix your electricity problem.

De Soto Electrical Products is a locally owned and operated electrical company in De Soto, MO. We had our beginnings as an HVAC company in 1965 and have since expanded to offer other services, including geothermal services, propane tank refill, and more. In emergency situations, we’ll come over at any hour to fix your electrical problem or HVAC system. Contact De Soto Electrical Products today to schedule an electrical repair in De Soto.